One of the most famous and most recognizable buildings of the Polish capital, without a doubt, is the magnificent building of the Bolshoi Theater, which is rightfully considered one of the leading theaters in Europe. Fans of theatrical art are simply obliged to attend the performances of the Bolshoi Theater. And the rest can simply admire the masterpiece of architectural art of the early 19th century.

The tradition of theater art in Warsaw dates back to the beginning of the 17th century, when King Vladislav IV organized the first productions, adopting the experience of Italian directors. Since then, the Polish monarchs regularly organized various theatrical undertakings. However, only at the beginning of the 19th century the question arose of building a specialized building in Warsaw that would meet all the requirements of that time, in terms of acoustics and comfort for the audience.

At the site of the Marywil shopping complex, which was destroyed by one of the Warsaw fires, in 1825-1833, the magnificent Bolshoi Theater building in Warsaw appeared, which immediately became one of the main architectural sights of the city. The architect of the building is Antonio Corazzi – the author of many architectural structures that define the center of the modern Polish capital.

February 24, 1833, the first performance took place on the stage of the theater. It turned out to be the immortal Rossini’s opera The Barber of Seville. Since then, the popularity of the theater has grown every year. And in 1840, Maryvil Square, on which the theater building was located, was officially renamed Theater Square. In 1862, one of the key episodes of the famous January uprising took place on the Theater Square, just before the theater, Ludwig Yaroshinsky made an unsuccessful attempt to assassinate the Viceroy of the Kingdom of Poland, Grand Duke Constantine.

In subsequent years, spheres and various small architectural forms appeared around the theater.

In 1939, during the capture of Poland by German troops, the theater building was largely destroyed. After the German army took control of Warsaw, an attempt was made to reconstruct the destroyed building. However, during the Warsaw Uprising, the building was finally destroyed. In 1944, several hundred Polish civilians were tortured and destroyed at this place.

In 1951, already in Poland, a competition was announced for the reconstruction of the Bolshoi Theater. The competition was won by a group of architects led by Bogdan Pnevsky. Later, significant changes were made to the project. As a result, the new building exactly repeats the historical building from the side of Theater Square (facade) and from Verbova Street. But from the side of the modern square of Marshal Pilsudski, the building represents the embodiment of a completely new project. And, of course, the interiors of the modern Bolshoi Theater are new. Here appeared one of the largest opera scenes in the world. In addition, a large number of various technical devices of the highest level were equipped.

Of particular interest is the quadriga located on the pediment of the facade of the building and the stucco figures located behind the quadriga. 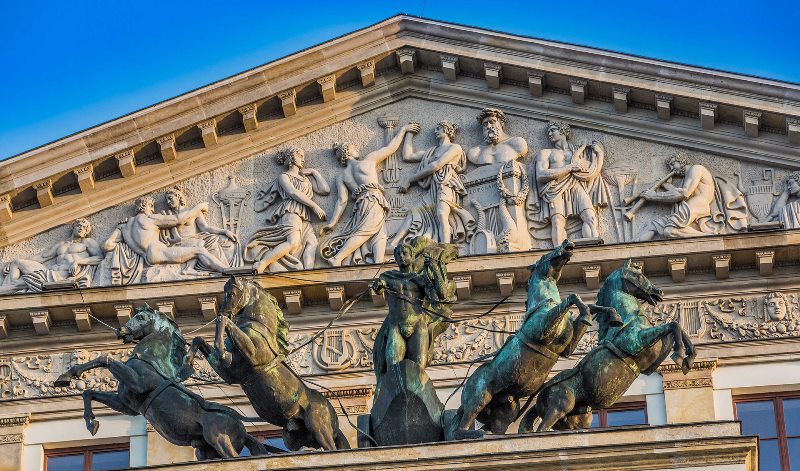 In 1991, during one of his visits to Poland, the theater was visited by Pope Jan Pavel II, who met with the theater staff. Today on the stage of the Bolshoi Theater many collectives with a worldwide reputation perform.The Bolshoi Theater in Warsaw is a business card not only of the city, but of the whole theater Poland. The grand building has a volume of 500 thousand cubic meters. Opera stage with a height of about 35 m and an area of 1150 square meters. meters, is considered one of the largest in the world. The hall named after Stanislav Monushka has 1905 seats. 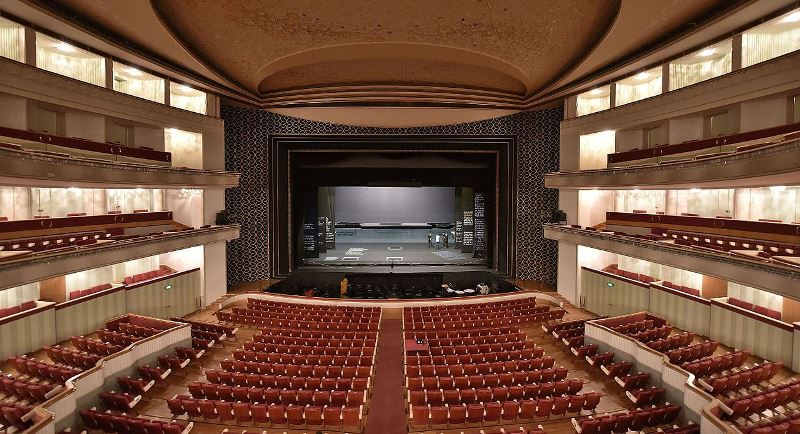 And, of course, the Bolshoi Theater is famous for its inimitable acoustics. In 2006, the Vienna Philharmonic performed under the direction of Ricardo Muti from Milan with success.

On the stage of this theater, such world opera stars as José Kura, Bogdan Paprotsky, Malgozhata Walewska, Placido Domingo and many other opera performers performed. The Bolshoi Theater takes part in the Opera Europe project. The most famous theatrical institutions of the continent also take part in this project. Such as Gran Teatro del Liceo from Barcelona, ​​Teatro Real from Madrid, Royal Opera of Copenhagen and many others. In addition, the theater collaborates with such recognized centers of theatrical art as the Metropolitan Opera (New York), Teatro alla Scala (Milan), English National Opera. The repertoire of the theater can be seen on one of the pages of its official website.

Thus, the Bolshoi Theater in Warsaw is the central stage of the whole country. It is here that all the most significant events of theatrical Poland take place. For this reason, theatergoers who are lucky enough to get to Warsaw just need to visit the performances in this institution.