Once upon a time, libraries were just a place to store scrolls. Over time, they became treasures, where they kept priceless tomes, and today claim to be open, modern centers of culture. We have selected the best and most interesting Polish libraries. 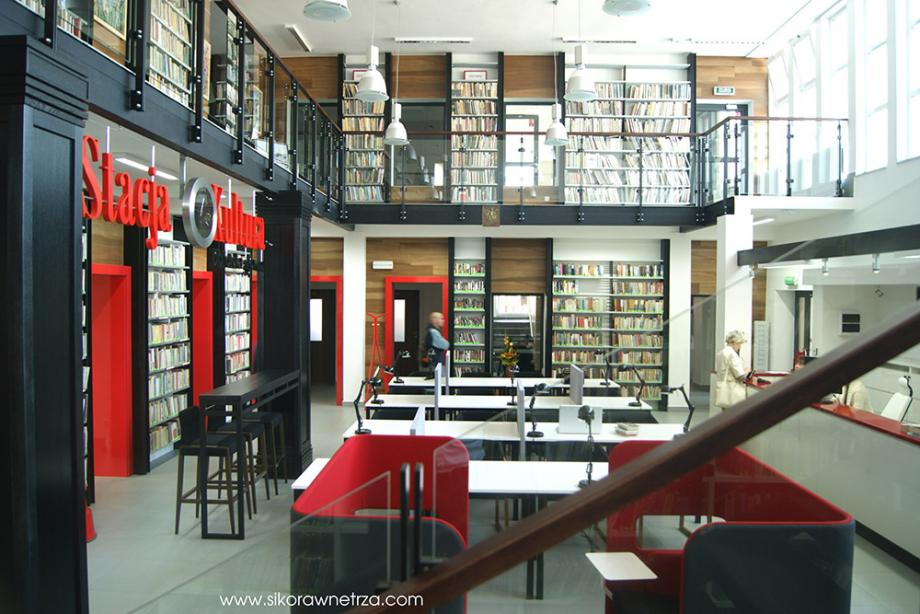 The saying “don’t judge a book by its cover” goes well with the train station in Rum. The significantly modernized low-key building of 1958 hides a real pearl – an innovative cultural center. In a cozy space there are: a library, workshops of photographs, paintings and sculptures, a corner for kids (with educational literature and educational games), computer workstations on the mezzanine, conference rooms, as well as offices of organizations. Every literature lover can come to the reading room, which was once a waiting room, and with a book in hand is conveniently located on sofas in the form of compartment compartments. This is not the only “railway” accent in interior design: black and red elements resemble the colors of an old locomotive, shelves are stylized as station platforms, and station clocks measure time. 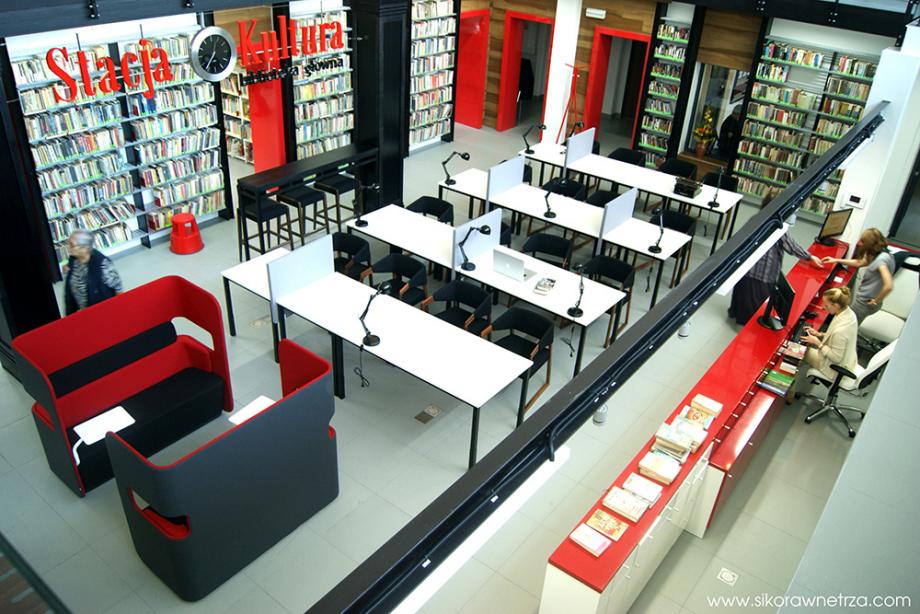 The station, opened after reconstruction in September 2014, has not lost its original functions, but the area of ​​the station, serving mainly commuter trains, now occupies only 20 percent of the room. The project of Jan Sikora (Sikora Wnętrza studio) attracts not only residents of the city (the number of readers has increased by 50%): envious views of architecture lovers from all over the world are now riveted to him. The jury of the prestigious American competition “Library Interior Design Awards” awarded the “Culture Station” with the prize “The Best Library of the World” in the category “Single Space Design”. The new library has become a must-have for all lovers of books and unusual interior design. 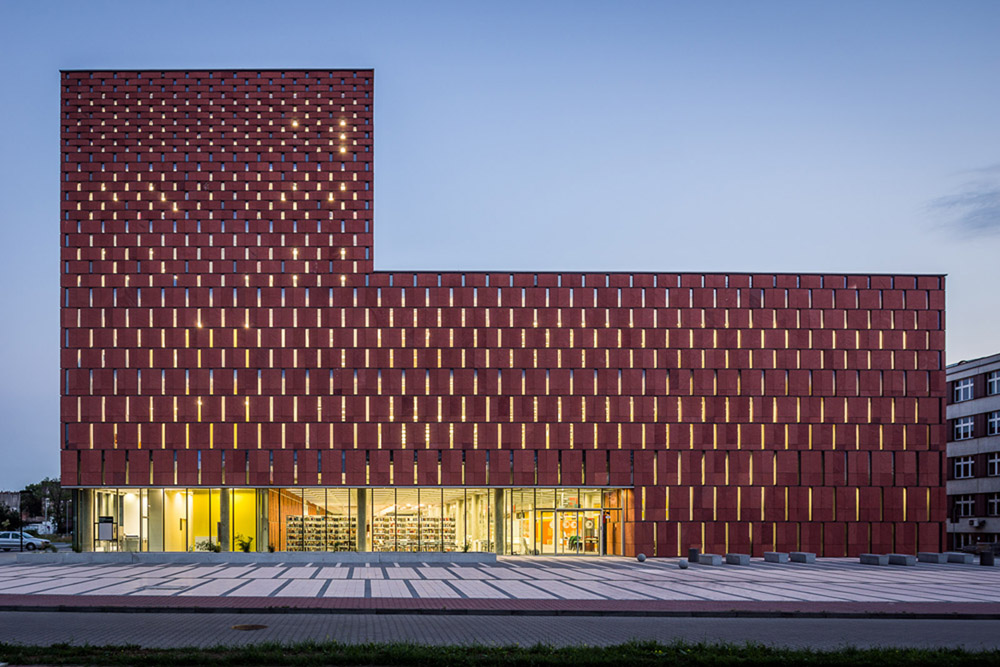 Jorge Luis Borges described the Universe as an imaginary library, consisting of an infinite number of hexagonal galleries – with an infinite number of floors, spiral staircases – which contains all the books of the world. The mystery of this utopian vision was saved by the authors of the book depository of two universities in the city of Katowice – Silesian and Economic – architects from the workshop “HS99”. The total length of all the shelves of the Center is 60 kilometers: it is not surprising that it is very difficult to estimate the size of the book collection.

The interiors, made with geometric precision, give the impression of harmony and silence. Windows also create a special atmosphere: in the daytime, sunlight falls and scatters through more than 4 thousand glazed openings, and after sunset, artificial light spreads a mosaic of dark and light fields on the surface of the building.

The block in the form of two parallelepipeds of different sizes fits perfectly into the urban landscape of the city. The intense color of sandstone (locals call this building “red”) is a bias towards the brick building of neighboring industrial facilities or Silesian “family names” (multi-apartment buildings of the 19th century, designed for workers in heavy industry). The project, marked by numerous awards, was implemented in 2012.

“Hinc omnia” (“From here everything” – lat.) Reads an inscription on a large open stone book crowning the entrance to the university treasury of knowledge. He is guarded by the statues of four sages: Casimir Twardowski, Jan Lukasevich, Alfred Tarski and Stanislav Lesnevsky. However, before we cross the threshold of the main building, we must go through the so-called “street” – a passage blocked by a glass roof connecting two buildings. The facade of the building is decorated with eight plates with texts in different languages, mathematical formulas and a fragment of a b-moll sketch by Karol Szymanowski. The idea of ​​architects Mark Budzinsky and Zbigniew Badowski was to create the impression of a transition from a busy square to a shrine, to impress visitors with monumentality and openness of space, a clash of tradition with modernity (paper card catalogs next to computer desks).

On the roof of the library located and the embankment of the Vistula River, which opened in 1999, three years later, a botanical garden was opened according to the project of Irena Bayerskaya. It is one of the largest and most beautiful roof gardens in Europe. Its lower and upper parts are connected by a stream with a cascade of waterfalls. At the highest level, zones are identified: purple, gold, silver and green (so named for the shades of the plants blooming there), and from the bridges and the observation deck you can admire the panorama of the capital or look through the windows inside the building. 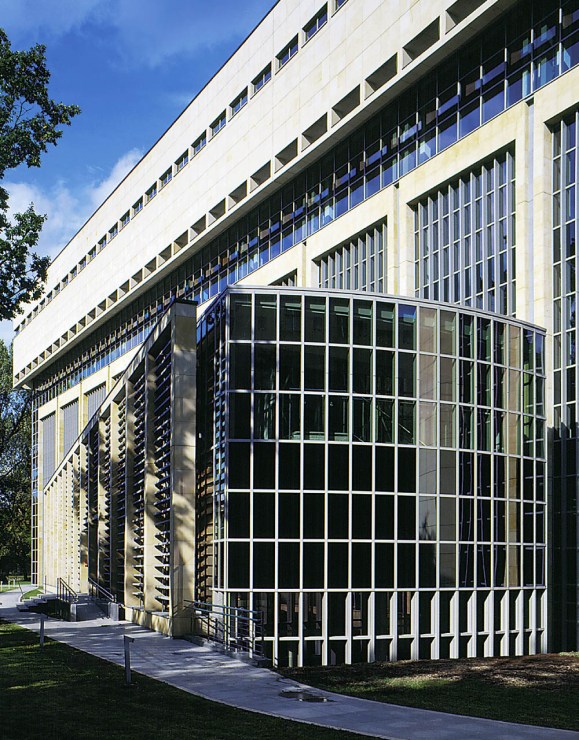 If we are talking about university libraries, then we can not fail to mention the famous “Jagiellon”. The book depository of the oldest higher educational institution in Poland twice changed its location, until before World War II it had settled on Mitskevich Avenue. The monumental and noble building in the shape of the letter “T” was designed by architect Vaclav Kshizhanovsky. The main reading room is surrounded by galleries, the stairwell is similar to the main staircase in the palace, and light and bright interiors are combined with a facade that resembles rows of books on shelves. After the war, this modernist building was rebuilt twice. In 1962-1963, according to the project of Jerzy Vezhbitsky, one of the parts of the library was expanded, and in 2001 the construction of the wing was completed with access to Oleander Street.

The Jagiellonian library, which is considered a national book depository, has been collecting its collection since the 14th century. The emphasis in it is on publications from the humanitarian sphere. Various types of Polish and foreign publications are kept here. The richest collection of Jagiellon, together with the libraries of the faculties, totals more than 7.5 million publications, including many manuscripts and old-printed books. The most valuable monuments of the Polish language that are stored in this library include: “Theotokos”, the oldest Polish anthem of the 15th century, manuscripts “On the rotation of the celestial spheres” by Nikolai Copernicus, Scherzo E-dur Frederic Chopin and even “Liber viginti artium” – “ Book of Twenty Arts ”, which the legend connects with the magister Twardowski, the sorcerer and the warlock (the spot on the parchment is considered the imprint of Satan’s paw). Umberto Eco was definitely representing this place when he talked about the library, which “becomes an adventure”, and “the discovery of books whose existence was not suspected”. 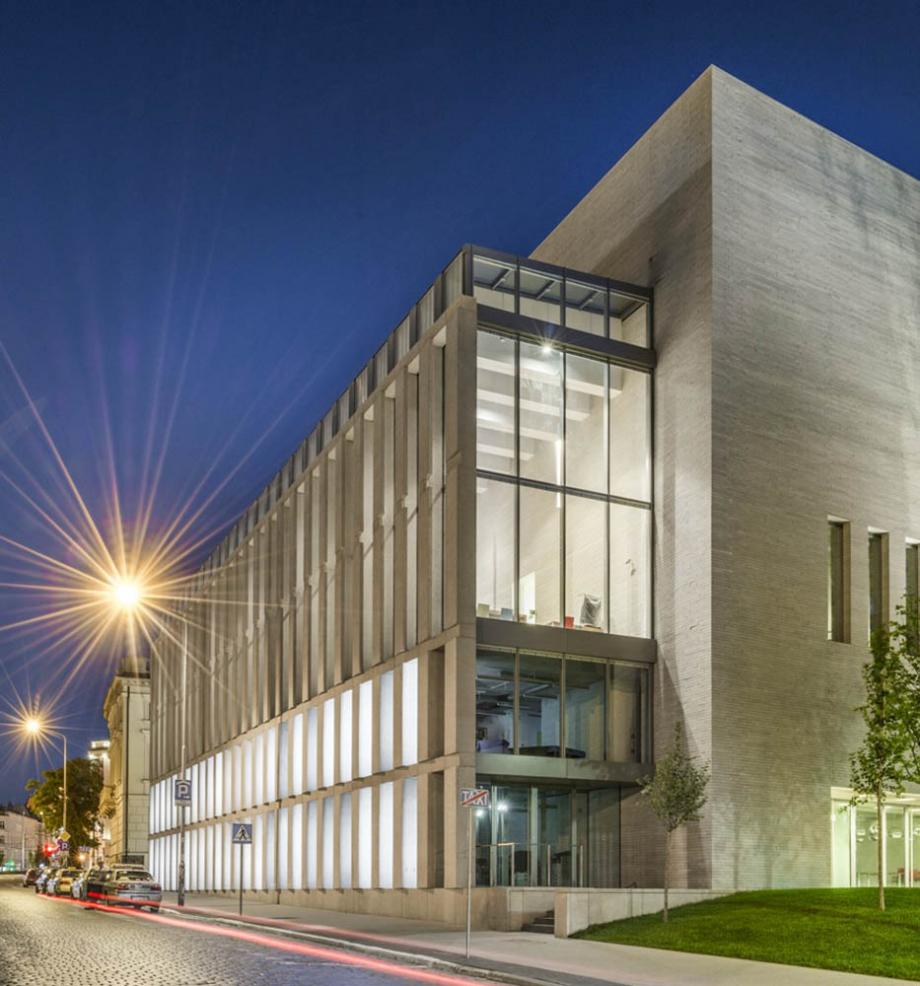 The history of this institution dates back to 1829, when Count Edward Raczynski opened a regional center of Polish culture in the territory under the rule of Prussia. The palace in the style of classicism, the prototype of which was the Paris Louvre, was facing the facade of Freedom Square in Poznan. The basis of the book collection of the first public library on Polish lands was the private collection of its founder. Now in the library are kept the archives of Jozef Ignacy Kraszewski, Kazimera Illakovich and Henryk Senkevich. The book collections distributed among the different branches were decided to be reassembled in the main building in the city center. The Warsaw architectural studio JEMS Architekci faced a difficult task. It was necessary to develop a project for the reconstruction of the library building so as not to lose its historical context. The authors with honor came out of this situation: they built a seven-story wing behind the historic building, connected to the old part by a glass passage. The new facade, erected in 2013, has become a modern interpretation of the columns on the historic facade. The area of ​​the object has increased almost three times. It was an extraordinary decision to place a book depository on the upper floors without windows to protect valuable tomes. The middle floors are reserved for reading rooms and workshops, while the ground floor is occupied by a cafe, a library for children and an art gallery.

Not only in Poznan pay attention to the dialogue of the past and the present. On the edge of the Old Town in Opole, next to the Philharmonic, the Gothic-Baroque Franciscan monastery and the Museum of Prisoners of War, the modern building of the City Public Library was erected. It is separated from the 19th century building by a glazed opening through which the boulevard and the river canal are visible. Internal bridges and passages allow free movement between the old and new library buildings.

In the spacious library building, in addition to books, there is a rich media library, a “fairy tale room”, a computer reading room, a photo gallery, a conference room and a cafe. Outside, the eye is attracted by an unusual facade with the texts of the poet Edward Stakhura written on it. The library building project (sponsored by Malgozhata and Andrzej Zatvarnicki from the Architop architectural studio) received the SARP Award in 2011 for the best architectural project erected with public funds, and also won the Polish Architecture XXL competition. 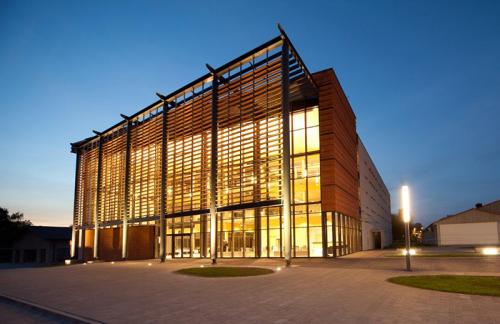 5 thousand square meters, underground parking, two small cinemas, a cafe, a play area for children, conference rooms and almost 1.5 thousand visitors a day. These words do not refer to some shopping center, but to the Auschwitz library, which, according to the authors, should remind him. Almost everything coincides: the layout of the rooms at several levels corresponds to the location of the galleries, you can enter the room from both sides, as in a shopping arcade, and the interior space fills with a rainbow of luster: horizontally located ceramic elements of the interior refract light beams and give the facade the character of blinds. Only books are on the shelves instead of goods.